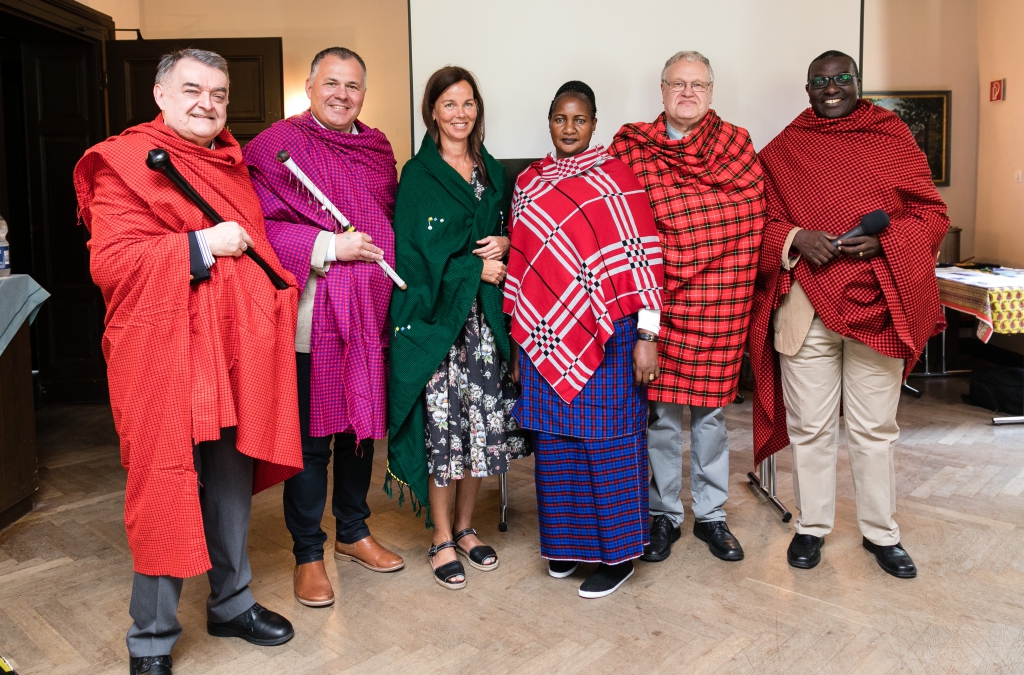 The information event on April 14, 2018 was well attended. We thank our patron, Minister Herbert Reul, for his participation and his appreciative and encouraging greeting. Toima and Philomena Kiroya, heads of our Tanzanian partner organisation ECLAT, reported first-hand on the current status of the projects. Many thanks to everyone who took part! 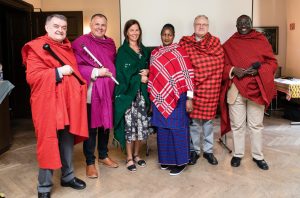 The construction of the secondary school in Emboreet continues at a rapid pace. On February 19, 2018, we were once again able to hand over new buildings to the district government as operator of the school, this time six terraced houses as a domicile for the school’s teachers. As boarding school teachers, they have to live on the school grounds in order to be able to look after the students after class. Until now, however, the teachers lived in the villages in the area, often came to school too late in the morning due to the long distances and returned home early. Only the headmaster and two families of teachers already lived on the site. The teachers had been asking for apartments for a long time, now they were looking forward to their apartments and were very grateful. When the day’s events were over, all 14 remaining teachers moved into the new houses the same evening. Now they can devote the whole day to the education of their students instead of spending their time on long marches. 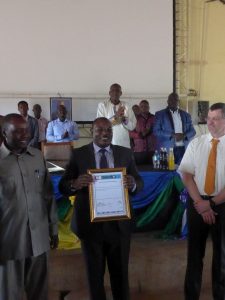 Minister Sinkamba Kandege presents the handover certificate for the residential buildings; next to him the district commissioner Zephania A. Chaula and Alexander Nikolakis, deputy head of upendo

On the same day, the foundation stone was laid for new dormitories for girls. They are to be opened as early as May, so that girls can also be admitted to the upper stage in June for the new school year – making them the first in the district.

The results of last year’s final examinations are now also available. The headmaster proudly told us that all pupils passed the intermediate examination after the first two school years, and even quite well: 18 very good, 13 good, 21 satisfactory and 16 sufficient. The results of the final exams after four school years (secondary school leaving certificate) were also good and significantly better than in the previous years: the school came in 8th out of 63 schools in the region and 224th out of 1,738 schools in the country. These students have already benefited from the rapid expansion of the school through upendo and also from the good equipment of the school with teachers who are funded by the district government. Our cooperation is bearing more and more fruit! 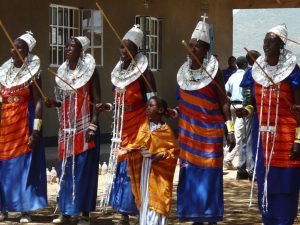 On February 16, 2018, we handed over three new classrooms to the district government as the operator of the primary school in Malambo (Ngorongoro district). More than 1,200 students are currently being taught at this school. Many of them live in boarding schools on the school grounds. But the school was once built for 350 children. As a consequence many children are “crammed” into a classroom for instruction, sometimes more than 100 – and the learning outcomes correspond to these circumstances. On top of that, the rooms are getting on in years and need renovation. Despite this, it was a beautiful handover ceremony with traditional dances and songs – and with many, many children who are hopeful about a future, despite few chances. Fortunately, the expansion of the school continues: ECLAT started building

Thoughts on upendo’s project work during our visit in February

The opportunity to see the projects supported by upendo and carried out by ECLAT in real life and to experience the associated environment ‘live’ is invaluable. This made it possible for us to combine initially rather abstract information about the projects with our own experiences and with encounters on site – in other words, to experience them in reality. At numerous meetings and consultations with local leaders, school principals, teachers and women’s groups, we were able to gain our own unadulterated impressions on site. These diverse impressions are difficult to summarize due to the wide range of perspectives. They ranged from the joy and gratitude of the local population for the positive development of their environment to the many difficulties, obstacles and adversities that contribute to the fact that some things do not run as one would ideally like them to. However, we would like to share one important insight, even if it sounds banal at first: access to education, and thus the possibility to learn something about oneself and the world, is the key to a self-determined life. Whoever is denied this is also deprived of the chance of an independent and fulfilled life. That is why every investment in education is right and important, because it forms the foundation for the further development of a society. Each of the schools that have been renovated or newly built so far is an important building block in this process and can ideally provide a future for the children on site.

The fear of the loss of traditions – probably one of the reasons why education has not had a high status among the Maasai so far – is not unfounded. Traditionally living tribes with their treasure of customs and traditions are in the absolute minority in our globalized industrialized world – not only in Tanzania, but worldwide. It is therefore a delicat balancing act that requires great caution to show ways and possibilities for a better, sustainable future for the Maasai without compulsively prescribing it from an outsider perspective. In the course of such a transformation, one should take great care in order not to make unverified judgements on traditions and values; instead of throwing them overboard as something outdated and negative the challenge is to rather try to view them with the prudent eye of reason and strive to find a worthy replacement. An alternative approach that can be integrated into a future life and in which tradition could live on in a transformed form. If it were possible to perceive further development as an opportunity and not as a threat, a great deal would be gained. The prerequisite for this is information, which ultimately cannot be achieved without education.