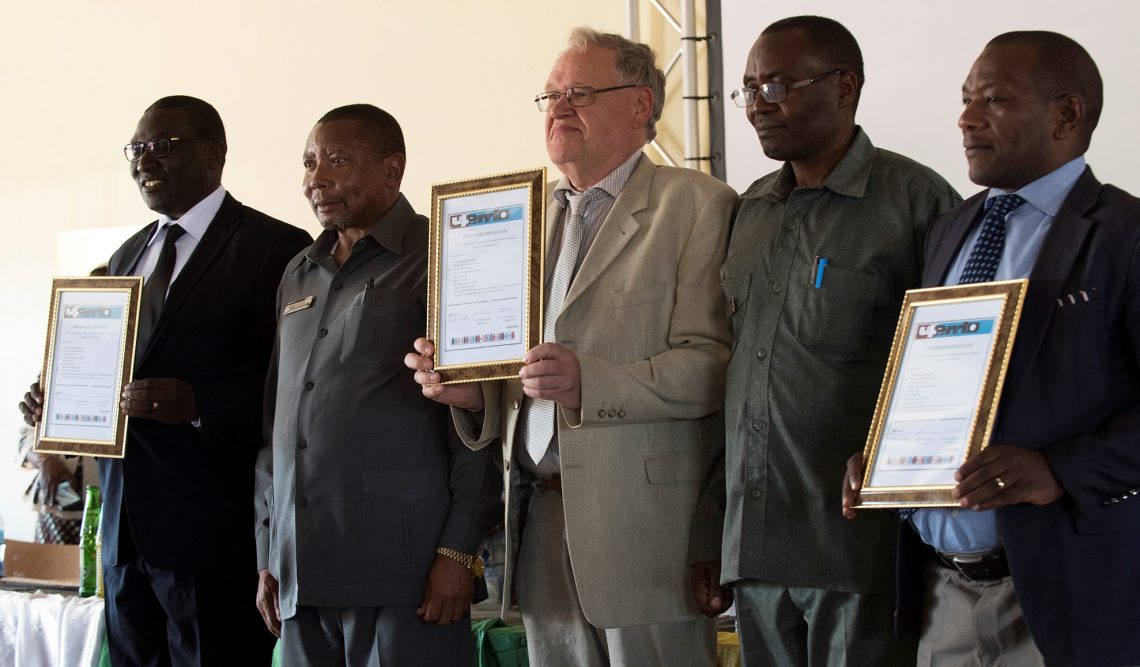 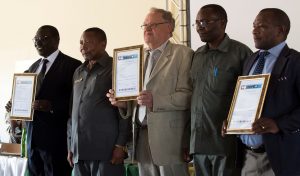 After the signing of the documents

“Guest of Honor” was again the Regional Commisssioner of the Manyara region, Joel Bendera. But also the local population was also extremely well represented; some participants had come to Emboreet from far away villages. The graduation ceremony took place in the now completed school canteen, which will also serve as a multi-purpose hall in the coming years. On the roof of the school, solar panels now ensure that the school has electricity. Solar batteries in an isolated and cooled room are used to store the electricity for the night hours. In the kitchen next door, fresh and clean water flows from the water taps, and the fermenters at the toilets supply biogas for cooking thus replacing firewood, which is becoming ever scarcer. Thanks to the permanently installed loudspeaker system, large events like this celebration are possible, and films et al. can be shown on a large screen by using the beamer under the ceiling. Also teachers like to use it for training purposes. All guests can sit on one of the 650 modern chairs and there are ample tables for the school canteen.

Handing over to the School Management 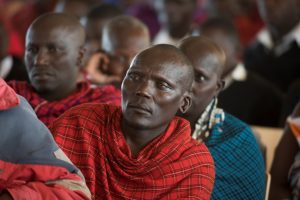 Attentive audience at the closing ceremony

As part of the celebration the canteen with all its extra equipment was officially handed over to the government which is in charge of the school. The relevant documents were signed and solemnly handed over. In addition to thanking for the financial support provided by our supporter, I also pointed out in my speech that the contribution from Germans will not exempt the Tanzanian government and the local Tanzanian community from playing their part in developing the school. The government has now declared that it will build a dormitory for girls, and Tanzania National Parks has already started building the school’s administrative building and the teachers’ rooms

The main theme of the various speeches, as in previous years, was the importance of school education for the restrained Maasai population. Parents were once again encouraged to send their children to school. This promotion along with the demands of the new Tanzanian president is now showing fruit: in a nearby village the headmaster told me the day before that he expects all village children of the relevant age group to attend school with the beginning of 2017. I heard something similar from another Maasai village: there the headmaster expects 400 (!) new schoolchildren. This is a development at which we can only marvel and for which we are grateful. A development which also puts a claim on us because the schools simply do not have enough classrooms and the existing ones are often in a disastrous state.
upendo therefore wants to support primary schools in addition to the construction of the secondary school in Emboreet next year.

We are pleased to report on our trip to Tanzania, where in July this year we visited the city of Arusha, the Maasai village of Emboreet and two nearby national parks. We – a nephew and niece of Fred Heimbach – their spouses and their two daughters aged 11 and 10 years.
Most impressive were our experiences in Emboreet, where Toima and Philomena Kiroya were our hosts. Despite the strangeness and the wildness of the adjacent Maasai steppe the couple and their children always gave us the feeling that we were protected and cared for so that we never felt as strangers. Despite the relatively modern life in the house of our hosts we felt their ties to the Maasai culture. It became noticeable in Toima`s care for the remaining cattle herd. In the evening, whenever he was not occupied with other things, he eagerly awaited the return of the cows from pasture in the steppe. The majority of his cattle live in the middle of the steppe, in his Boma, situated about 25 km away from his house. On the occasion of a festive barbeque with friends from nearby Bomas he also showed us how even a European can survive a night in the steppe protected by thorny hedgerows and in the company of hundreds of cows, sheep and goats. We have also witnessed how the Maasai live deeply rooted in their traditional gender role patterns: the men and boys guard the cattle herds, the women and girls take care of the household, they do the cooking and washing by hand. Living without electricity and running water is entirely normal; there are no refrigerators, washing machines or vacuum cleaners. And when the sun goes down at seven-thirty in the evening, it becomes dark, because only a few Maasai families have solar power.

We were able to witness the progress achieved in the supply of the urgently needed vital sources of water and energy while visiting the secondary school in Emboreet. It has a water supply operated by solar power, and in the near future, biogas, which is extracted from human excreta in fermenters on the school ground. Its facilities with solid buildings and especially the dedicated teachers and highly motivated pupils convinced us that this school will have a good future and be a step forward for the whole region. Particularly memorable were our meetings with the upendo supported women’s groups in Narakauo and Sukuro. The Maasai women with their colourful cloths and beautiful pearl jewelry on their black skin gave a truly colourful picture. With their traditional welcome songs and cheerful “bouncy dances” they spread not only optimism and good mood but also radiated self-confidence which is one of the goals of this group work. Through upendo we hope to support their zest for life so that the women can pass it on to their children. May they recognize that courage, ideas and creativity are good gifts and can lead to positive changes. And may it become clear that only education in which individual talents are recognized and promoted opens up new possibilities for their children an for personal and social development.
Susanne Koppelmann, Barbara Reisner-Koppelmann, Josef Hahn and Simon Koppelmann
CategoryInfobrief
TagsGuest article, Secondary Schools