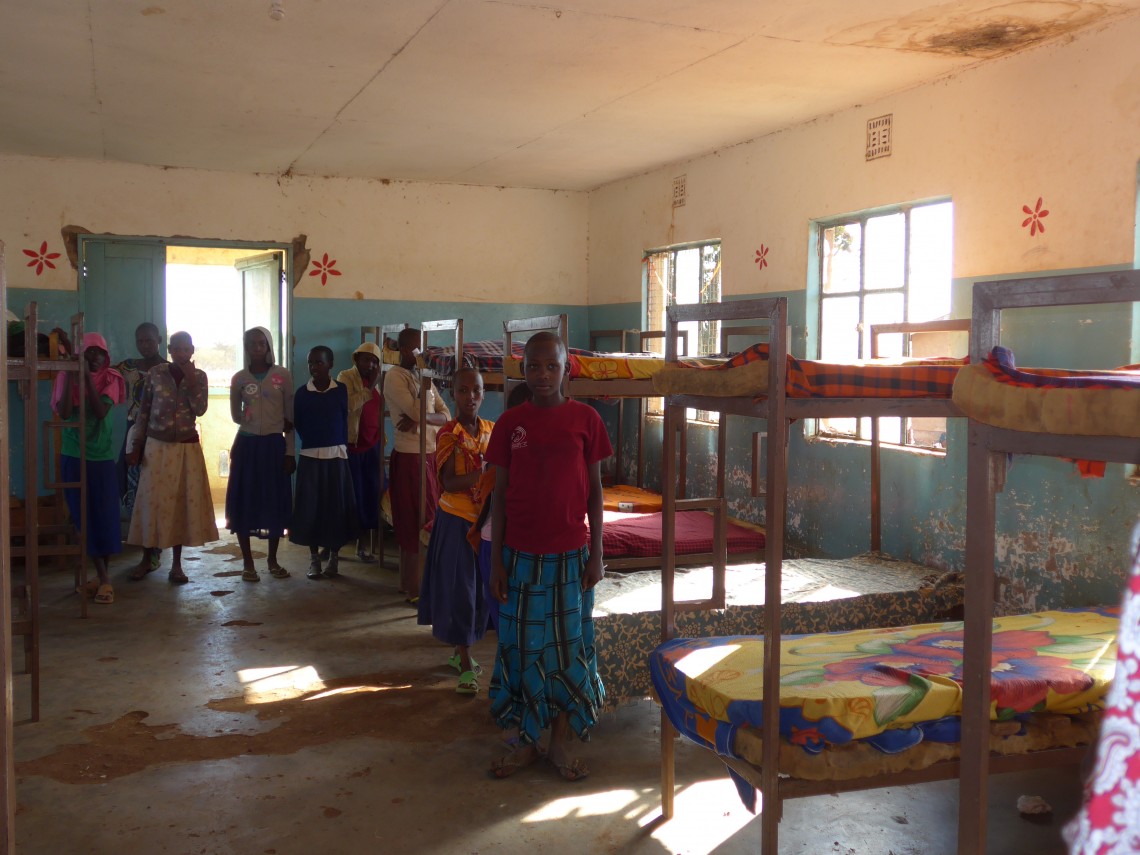 Dormitory for students of secondary school in Emboreet

My last trip to Tanzania in August this year focused on a visit to the secondary school in Emboreet. Thanks to the financial support of the Foundation for Care and Education the construction work made remarkably good progress.
The laboratory building had been nearly completed by the community. According to our agreements on the school`s site plan it is situated next to the classrooms and shall therefore be used as such. The solar panels for the water pump have been fenced in and securely locked away by the school. The teacher`s house which had been under construction since the beginning of the year was not yet inhabited, the sewage tank was missing an a part of the interior fittings. These works ought to be quickly completed so that the building can officially be handed over to the government as the operator of the school.

The shell of the first dormitory building for boys had been completed already in August even though the construction works had started only a few weeks ago. Plastering services and some final works were still missing. The construction of the second dormitory had just started. The completion of both buildings should be resolutely pursued that the boys can move in in November before the buildings are handed over to the government. Till then our students have to walk long distances between their village and the school (only very few of them own a bicycle) with the result that many arrive tired and exhausted in their classes.

Secured solar cells for the power supply of the water pump

Also in the canteen some precision works and electrical connections still had to be done. At the suggestion of Toima this building is meant to be handed over to the government only in the following year once the infrastructure connections for water, electricity and gas will be ready and benches and tables have been installed. To provide the school with solar electricity
and bio-gas for the canteen will be our most important tasks for the next year and in addition the distribution of electricity, water and gas on campus. The construction of another classroom building (a second natural sciences laboratory) is of lesser priority in our plans for 2016.

Girls dormitory of the primary school in Emboreet

In August I visited the primary school in Emboreet for the first time. It made a deplorable impression. The school was built in 1965 by the catholic church; it was the first school at all in the Simanjiro District. –after independence in 1072 it was handed over to the state as „Simanjiro Primary School“. Ever since almost nothing has been repaired or renovated. The school is run for the children living in the village and the immediate surroundings as a day school and for children from further away villages as a boarding school. Out of 566 students (328 boys and 238 girls) only roughly 60% attend classes. Parents tend to take their children out of the school during the cooler season and do not bring them back, mainly because of the awful dormitories The windows are broken or missing altogether (the region lies 3280 feet above sea level and at night it is cold at this season). The floor has large and deep holes and the walls as well. Many of the bunk beds are damaged and can no longer be used, the matrasses are partly tattered. The rest of the beds are in good order but their number is not sufficient so that sometimes three children have to sleep in one bed. I did not notice any covers on the beds but instead I saw hens entering through the open windows and doors and messing up the beds. 189 boys and 85 girls officially attend the boarding school.

There are nine classrooms and ten teachers (out of which sex female teachers) none of whom speak English nor does the headmistress. The teachers – primary school teachers in Tanzania are usually not well educated – made a rather unmotivated impression on me. The classrooms were in a neglected state, small and large holes in the walls and in the floor, only a few benches some of which were no longer useable, nearly all windows broken or missing. The cookers are heated with firewood but they are broken at the outside. The chimney has a hole of 7 inches diameter so that from outside you can look into the oven. The teacher`s houses are in similar conditions.

The headmistress handed over to us a list with the most urgent repairs to be done at the school. Toima and I agreed that there was need for action. He took care of finding financial support for these works and we are optimistic to receive some funding in the coming year. If the children even do not attend the primary school they certainly will not attend a secondary school.

Women`s projects are still an important part of our community development support. The number of women groups is still rising and there are high expectations even though we are not able to raise the financial means necessary to support all the existing groups, a fact which we have communicated.

I was particularly impressed by a visit to the women group in Loboseit. At the beginning of the year we had supported this group with 1000 € from which the women were able to buy plastic bottles which they now used to sell their liquid soap. Since then the sales volume had tripled. The women demonstrated during our visit the production of 120 l of soap using a variety of chemicals – a tedious and energy sapping labour. At present there are two women groups with 45 women altogether. Apart from the liquid soap they have also started a bee project at the beginning of the year and have already sold 150 kg of honey. Further activities are
Chicken breeding, selling of homemade breads and the cultivation of vegetables. The income enabled them to buy school uniforms for all their children, for one woman`s children the school tuition was paid for as well as a hospital stay. This group is not representative, the coordinator, a teacher in the secondary school in Emboreet, is highly motivated and above all she can motivate the other women. But the success of this group is certainly an inspiring example for other groups.