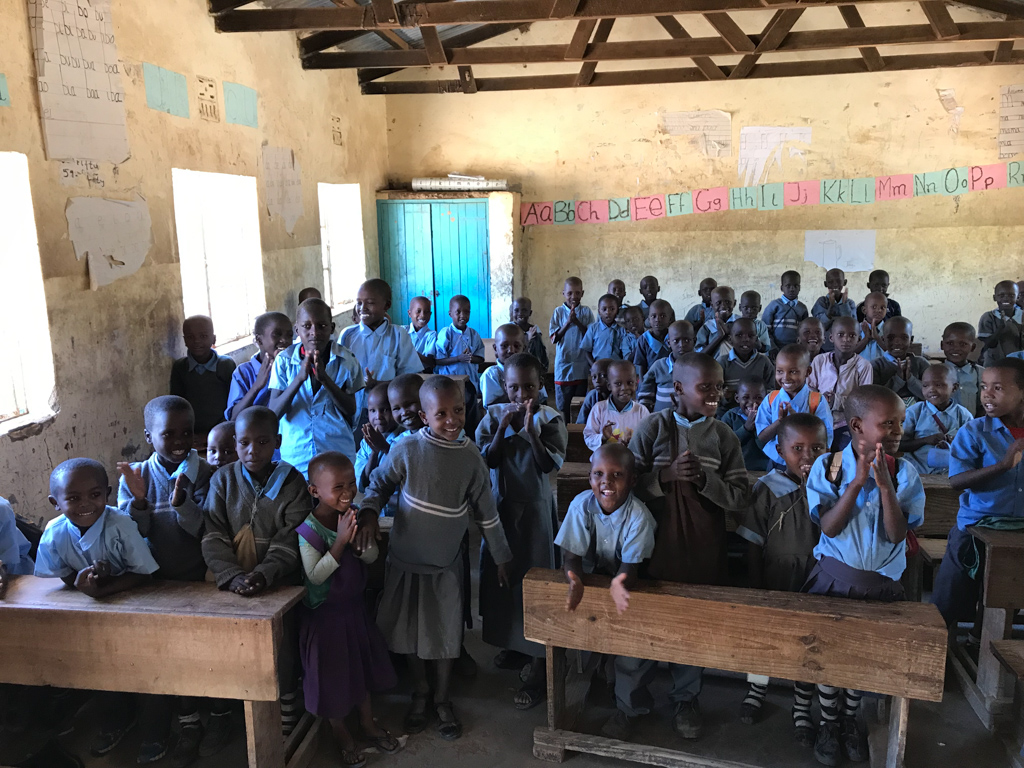 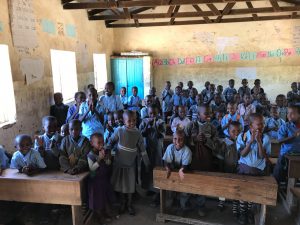 Often, as here in Malambo, more than 100 children sit in one classroom

The school system in Tanzania is influenced by the English school system from the colonial period. The “Primary School” has 7 year classes (apart from the one year kindergarten which is compulsory today). Those who pass the final exams well qualify for secondary school. This lasts 4 years up to the “ordinary level”, which corresponds approximately to the German Realschulabschluss. Those who pass these exams well are also allowed to attend secondary school for the last two years up to the “advanced level”, which corresponds to the German Abitur.

All intermediate and final exams are central exams that take place simultaneously at all schools throughout the country. When the results of these exams are available after a few months, the schools are also compared with each other. These rankings are published on the internet and in the country’s newspapers and are an important motivation for the teachers and headmasters: they show how well they have taught their students. All schools, both public and private, take part, with private schools generally doing better than public ones. Since most parents in our areas of operation cannot read nor write, they do not support their children’s education – and these children have difficulties at school and usually do not do so well.

Tanzania has a total of 17,165 public primary schools and 5,753 secondary schools, but does not have the financial means to keep all these schools in good order and to develop and operate them according to demand. Officially, no more than 45 children per class are to be taught in the country’s primary schools, while the limit is 40 in secondary schools. However, the actual situation is different, especially in the remote areas where upendo is operating. In recent years the high number of children, government pressure on parents to actually send their children to school, a shortage of teachers and the growing public perception of the value of education have led to a sharp increase in the number of children attending primary schools in our areas of operation. 100 children in a classroom is no longer a rare occurrence at such primary schools; the highest number of children I encountered in a classroom last year was 136.

upendo would like to give as many of these children as possible the chance of an adequate school education. To this end, we are committed to expanding and building new schools, and this year we have already built six schools.

A new Primary School for Emboreet 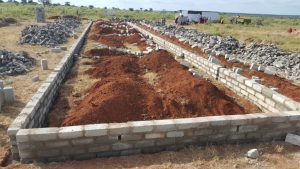 Start of construction work for the new primary school in Emboreet

At the beginning of the year the photojournalist Claudio Verbano reported in our last information letter and in the magazine Chrismon about the daily 4-hour walk of the 9-year-old girl Pendo to her school (and back). After our visit to her family’s boma, we decided in February to build a new primary school in this area of Emboreet rather than extend the existing one, to which Pendo and many other children march daily. In response Chrismon published an appeal for donations for the new school in May (https://chrismon.evangelisch.de/projekte/schulbau-in-tansania-49673). We are moved and grateful for the many readers who have meanwhile transferred money to upendo for the school construction. Since the Fly&Help Foundation is also supporting the new building, the construction work could already start at the beginning of June. 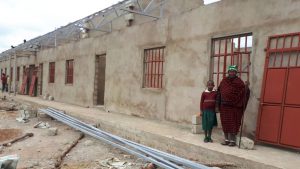 ECLAT wants to hand over the new school with initially four classrooms, two toilet blocks, two residential buildings for teachers and a rainwater collection system to the government as early as September and then start school operations. It could hardly be faster! We will report on the opening of the school and would like to thank everyone who made such a quick solution possible so that Pendo and many other children now have much more time and energy to spend on learning. 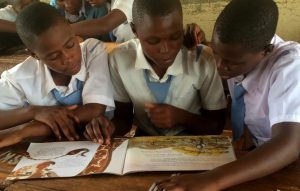 Schoolgirls read “Juma the Giraffe” in the PAMS book

Since 2015 upendo has been supporting the PAMS Foundation in environmental education in schools. The vision of PAMS is a world in which wildlife and national parks are protected and people in their vicinity can live safely and understand the value of nature. Since the wild animals of the park threaten the livelihoods of the neighbouring population and since the grasslands of the parks are not available as grazing land for the herds of the Masai, the population is hardly willing to support the idea of animal and nature conservation. The environmental education of young people in schools is the key to teaching the next generation the importance of wildlife and the conservation of natural resources and thus to contribute to the protection of the national parks.

The educational work in secondary schools east of the Tarangire National Park in Simanjiro district and west of it near Babati has been expanded to about 10 secondary schools in recent years and now has an impact on about 2,000 children. The “club” is very popular, a good number of the pupils take part in the voluntary events. They learn the meaning of nature and animal protection, how to plant trees, and they visit the adjacent national parks. They learn to understand the most important environmental problems of their region. 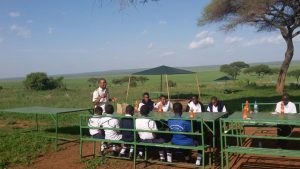 Ferdnand, teacher from PAMS, with students in Tarangire National Park

When we attended the course at the secondary school in Emboreet, we were impressed by how clearly the students were able to identify and discuss the environmental and conservation problems of their country. A project that is already bearing fruit and giving hope. 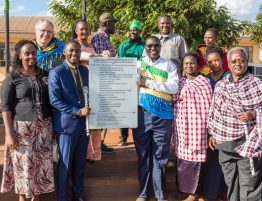 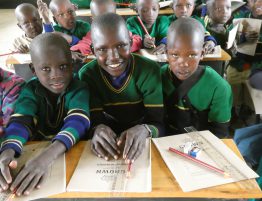