Handover of the vocational training center

Meeting with the apprentice bricklayers of the Vocational Training Center

Only recently, on 19 October, we were able to hand over the new Vocational Training Center in the Simanjiro district to the Tanzanian state. ECLAT has built it in the past 12 months. Although for a start only 24 bricklayer apprentices have been trained there since July, the first steps have already been taken to add further branches of training. VETA, the state authority for craftsmen training, has taken over the centre and operates it. VETA wanted girls to take part in the training right from the start and is currently building a dormitory for them because we could not shoulder this alone. For us, this is a nice sign of the government`s willingness to cooperate. In addition to the borehole with solar-powered water pump and water tanks, a classroom, canteen and kitchen, teacher/administration room, workshop, dormitory for boys, residential building for teachers and two toilet blocks belong to the centre. Of course, the necessary tools and machines are now on site.
The training is based on the German dual model, which means that the students also work on construction sites for companies – a model that we will support for some time. Contrary to Tanzanian rules, the pupils, girls and boys alike, come exclusively from the district. We hope that many will settle in the district after their training and promote its economic development. Because the craftsmen who work in the district still come from outside – including those who work in our various school projects in the district. We thank the Federal Ministry for Economic Cooperation and Development and DER Touristik for financing this project. 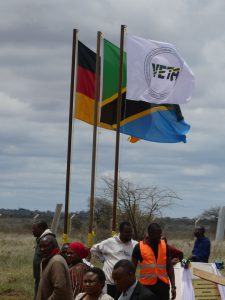 Many guests of honour had travelled to Emboreet to celebrate, despite the very early rainy season this year. VETA was represented by Dr. Bujulu, the head of the authorities, and Peter Maduki, Chairman of the Board of Directors, from Dar es Salaam, along with many VETA employees from the region and the country. Mrs Norzin Grideit-Dagyab from the German Embassy in Tanzania also came from Dar es Salaam to represent the German state. The guest of honor was once again the District Commissioner of the Simanjiro District, Adriano Chaula.


Graduation ceremony of the secondary school

Opening of the girls’ dormitory at the secondary school

On the same day, in the presence of all the guests of honour, this year’s graduation ceremony for pupils in fourth grade (Form IV, equivalent to our secondary school leaving certificate) took place at the secondary school in Emboreet. The first pupils of the final class (Form VI, corresponds to the Abitur/ university entrance qualification) will take part in the central final examinations in about half a year. In the many speeches, the value of school education was addressed in particular, and parents were again encouraged to send all their children to school and to support them. The increasing number of children starting primary school shows that our constant efforts are already bearing fruit.
It is already a tradition that during this celebration we as ECLAT and upendo handed over this year’s buildings and educational materials to the district as the school’s operator. As in previous years, this was possible thanks to the funds made available to us by the welfare and education foundation, for which we would like to express our thanks. A dormitory with beds for 64 girls, three classrooms with desks, houses for the housemother and the housefather, textbooks and laboratory equipment were handed over. 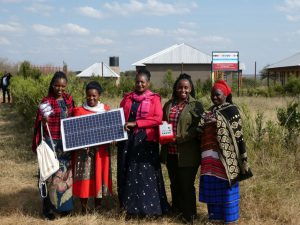 ECLAT “women’s team” handing over solar lighting equipment for the dormitory in the centre (from left to right): teachers Esther and Beatrice, Philomena, Catherine and Nosim

ECLAT has been working for a number of years to strengthen the role of women in the Massai culture. Philomena founded and runs this work. This includes the support of 75 women’s groups in the villages of the district that have formed in the last few years. After all, there are considerably more than 2000 women. The groups are visited by ECLAT staff in the villages to discuss their experiences and problems. Almost all of the groups have now received a micro-credit with which they can learn to run their own businesses. They find it difficult to suddenly own their own money and to operate successfully with it. Some have economic success, others hardly. ECLAT must also learn to advise and support them. This is not an easy task and the most obvious attempt is to use the money as all Massai do, i.e. to breed cattle or goats and sheep, an attempt which is subject to the same climatic and health risks as of cattle breeding in general, apart from the lack of feed at the end of the dry season due to the general overgrazing.
For two years now one of the women’s groups has been meeting week after week at the ECLAT Seminar Centre for Women’s Work to be trained there by the two teachers on important topics and to reflect together on the group and its success or failure. This is not an easy task either, considering that hardly any of the women have ever sat on a school bench to learn reading and arithmetic.

ECLAT has to constantly adapt the contents of these seminars, as well as the meetings in the villages, to new developments and experiences and constantly optimize them. We are delighted that Catherine Maguzu has joined the ECLAT women’s team. She has studied social sciences and is accepted and welcomed by everyone as a consultant. ECLAT’s women are now thinking about how to further optimize and adapt women’s work. A result of it is already the introduction of practical work in the seminar program, since the women are not able to convert a week of theory into their everyday life. A first step is the production of vegetables in a bag filled with earth and cow dung, for which only very little water is needed (photo). In addition, the assignment and repayment of microcredits are to be adapted, also in order to make the seminar center economically more independent of the payments from Germany. 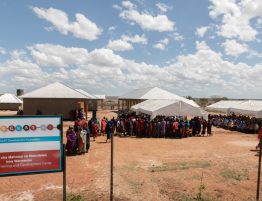